The Stirling Engine is significantly more powerful than a basic Redstone Engine, but uses fuel such as coal. It will eventually explode if it is producing more power than is being extracted from it.

Stirling engines (formerly called steam engines) are the second tier of engine. They use cobblestone instead of wood or iron so are still cheaper than the Combustion Engine. These engines cannot explode unless there is an oversupply of power. Note that the flame gauge on the Steam/Stirling Engine GUI does NOT indicate if it has any energy to run or not, but rather if there is still fuel being added to build up heat. In other words, the stirling engine continues to run quite a while after the instant the flame gauge empties and there is no more fuel in the slot to burn (unlike Vanilla machines).

*You cannot pump lava directly into the engine. It will only accept buckets of lava, although it will also accept lava cells, making it easier to leave these running a quarry on lava.

Stirling engines can be used as a power supply for mining machines, and can be connected to each other or can transfer power through Conductive Pipes.

Though all BuildCraft engines run at the same speed when hot (1 cycle per second), the Stirling Engine produces 20 times as much power as a basic Redstone Engine.

Stirling engines are a good choice for powering a pump for 1 or 2 Combustion Engines, while if you are using more, a combustion engine will be needed for the water supply.

On the GUI extra-window it shows how much "heat" and MJ is stored. If the stored MJ value goes too high the engine WILL explode, so you don't want to be producing excess power.

Stirling engines are a great way to use excess charcoal or coal coke generated from a Coke Oven.

If you are using this to directly power a machine, or anything else really, make sure the engine is facing the right way. It has only one output slot, so you can have problems with this. 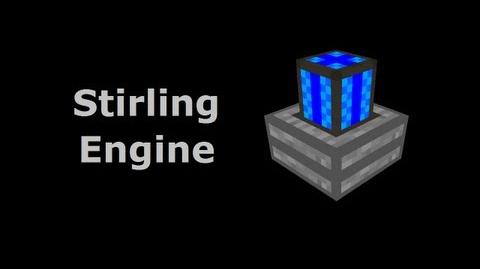 Retrieved from "https://feed-the-beast.fandom.com/wiki/Stirling_Engine?oldid=135022"
Community content is available under CC-BY-SA unless otherwise noted.