A Sentry Turret is an entity added through the Portal Gun Mod. It shoots at both players and mobs at 25 bullets a second. It only shoots at targets in front of it at an 180 degree radius.

Sentries can be destroyed easily by punching them or bumping them with your body. This can be done easiest from the back. Their fragility makes them suboptimal for protection from other players or mobs. On the other hand, Sentry Turrets can detect and kill enemies through Iron Bars, which, when placed protected by Iron Bars, the Turrets may function as an excellent defence system. A more effective other way they could used is on top of a player's roof shooting on enemies' heads. The only problem with this strategy is skeletons will try and shoot the turrets.

Much of its behavior is configurable in the properties file. The properties file (as opposed to the mod's main configuration file) is unique to each world, and is stored in the world's folder inside the saves folder. What the turret targets as an "enemy" is determined by the variable turretMode in the properties file. The variable turretRange, by default equal to 25, decides how many blocks it will sense an "enemy" mob from. If turretIsInvincible=0, it will die if pushed over, shot, exploded or punched. Otherwise, a turret will never die once placed unless it is dropped in lava. Sentry turrets also occasionally say things like, "Let's do this" or "I've got it" and otherwise "Is anybody there(?)" which adds a bit of character to them.

Sentry Turrets can be placed in 8 directions, and will be facing away from the player when placed from the inventory or being picked up using 'S. Sentries can shoot through iron bars. It is possible to remotely activate your Sentry Turrets using pistons as shown in this video: 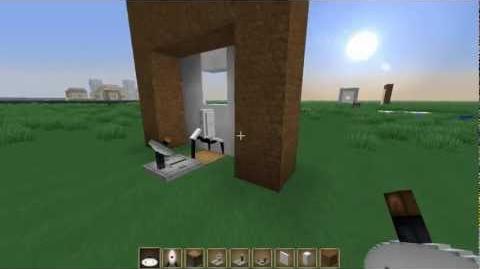 To silence these turrets after they become annoying, find the turret_autosearch5.ogg file in your FTB installation and remove the five sound files, then recreate them using blank text documents, set as read only, boot no more annoying sounds.