Before reading: The way fusion reactors work has changed completely in the newest version of GregTech!

The Fusion Reactor is the most powerful way to generate EU power in the game. The reactor is part of the GregTech mod. In Feed The Beast Beta Pack A, the reactor generates 4,096 EU/t. In GregTech 2.06, the reactor outputs 32,768 EU/t in 1,000,000 EU packets. The Fusion Reactor can also be used to produce Iridium and Platinum Dust, although this requires an input of energy instead of a generation of energy.

Caution: This guide is only for GregTech 2.x. GregTech 3+ changed the fusion reactor mechanics heavily and is not compatible with the information hereafter.

To set up a Fusion Reactor, a Fusion Reactor block is required as well as 24 Fusion Coils, 2 HV Transformers, cables to provide input and output energy, and a method of getting enough energy to trigger the fusion. Even reactions which are exothermic (energy-outputting) require a specific amount of energy stored before fusion can begin, usually several million. Thus, a stable power supply is necessary before a Fusion Reactor is set up to multiply this power. To use the Fusion Reactor as a power source, it will need to be charged untill it reaches 40 million EU. If it is used to create Iridium, it will need 90 million EU to start and then 2 to 4 million EU to continue production. Remember, if the resources for the reactor run out, it will have to be recharged again.

Each fusion operation has a required operation energy to trigger the fusion, a specific EU output, two input materials and one output material. If any of these are wrong, the Fusion Reactor will not function. All recipes with their necessary factors can be found in the database of a GregTech-Computercube.

Energy can be inserted via the two sides with the larger circles.

The Reactor has an internal storage of 100 million EU. 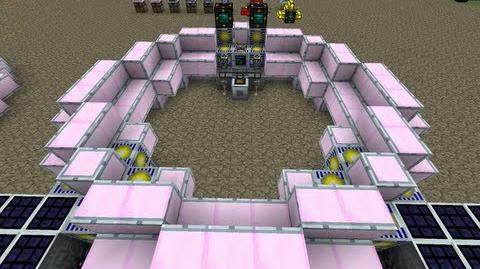 Retrieved from "https://feed-the-beast.fandom.com/wiki/Fusion_Reactor?oldid=125457"
Community content is available under CC-BY-SA unless otherwise noted.